For the last 8 months I’ve been playing God. In an art directorial sense of course.

It seems like a lifetime ago (last July!?) that Creative Review approached me to create this year’s Annual cover for them. I was duly flattered of course; it’s their biggest selling issue of the year. And to top last year’s magnificent ice sculpture in a boat building hangar piece!? To say I had a case of performance anxiety would be an understatement.

For a while I just looked at the last few years’ covers and I noticed a trend of increasingly elaborate set ups. The Dan Tobin Smith studio piece, the solid glass A and, of course, the ice sculpture/oil images. Bigger and better seemed to be the way to go but, after some soul searching, I realised that I just didn’t have the means to do ‘bigger’.

The only other option was to go smaller. Much smaller. How small could I go? That artist Willard Wigan happened to be in town that week. Surely too coincidental. Would he help me create a piece of tiny typography that could sit on the head of a pin? I fired off some emails to his ‘people’. Apparently not.

Ok. Fine. Smaller and smaller I thought. What about cell level typography? Manipulating life… what could be more creative than that? But was it even possible? There’s nothing I love more than surrendering my work to the process that creates it so this would be perfect. I reached out to a couple of UK universities with the necessary equipment and apparently it was. If I had £250,000 to throw at them. Thwarted at every turn.

And then, a couple of days later and via the miracle of Facebook, I was put in touch with Frank Conrad; an immunologist at the University of Denver’s research facility. “Yeah no problem, we do that thing all the time”.  In so many words.

And so, for the next few months (in between bouts of Frank having to try and find a cure for swine flu), we set about shaping life to our own ends. Conducting tests using a variety of techniques we eventually settled on melting plastic and putting it under a high pressure into a mould. 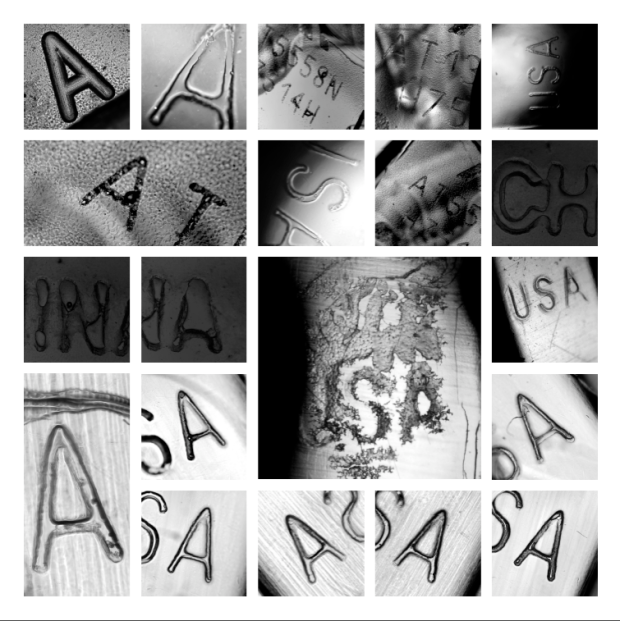 The mould in this case was the A from a ‘Made in the USA’ stamp on an aluminium pen… Our original choice for the cells were Chinese Hamster ovary cells but the techniques we were using proved just too much for them and they died, en masse, every time we went back to check on them.

The solution was pollen. The cells themselves are graphic and cool looking on their own, but we had to find a balance between getting enough on the slide to be worth it and also being able to get an image at a high enough resolution to be usable on a magazine cover.

So here we are.  The images are weird. A little sinister even. I like them. A lot of fun to make, and a lot learned along the way. A successful brief by any measure. Believe it or not there’s not an ounce of retouching here and the weird ethereal glow around the A comes from the lights in the microscope underneath the slide.

The Creative Review Annual 2010 is available now on news stands and, strangely enough, the app store!

13 thoughts on “Making of… The Creative Review Annual Cover 2010”